The main idea of the Evolving Service Endpoint (ESE) pattern is to be able to modify web service endpoints without necessarily disturbing clients. It should be possible to modify a WSDL without forcing all existing clients to adapt to a new API at once. The only way to achieve this is to implement web service endpoints which can accept client requests in different formats. These should also respond to clients in the same format used by the client in the request.

The proposed solution demonstrates one possible way to achieve this. Its main strengths are:

Although it should be theoretically possible to implement the proposed solution with any WS framework, our choice was JAX-WS RI 2.1 and the following discussion will rely on its concepts and capabilities.

Service dialects need to be loosely associated with the different message formats that are understandable by a web service endpoint. This association may be achieved in different ways and there is nothing in the proposed solution that dictates one approach or another. ServiceDialectAdapter is an interface and developers are free to choose appropriate implementations.

However, we believe that the best solution is to define service dialects in terms of xsd. There are basically two approaches:

The main advantages of xsd-based approach are:

As an illustration of different dialects consider the following two requests to an imaginary Customer Service. Both requests are asking for the same data but do it in different ways:

The following drawing illustrates an ESE which supports two dialects. Each of them is based on a separate xsd with a unique namespace. When a clients request arrives at the ESE, the service adapter just delegates processing to an appropriate service dialect adapter. Later we will see how and when the service dialect adapter is chosen. For now assume that the service adapter (Java class annotated as a WS endpoint) just happens to know the clients dialect for each incoming request. 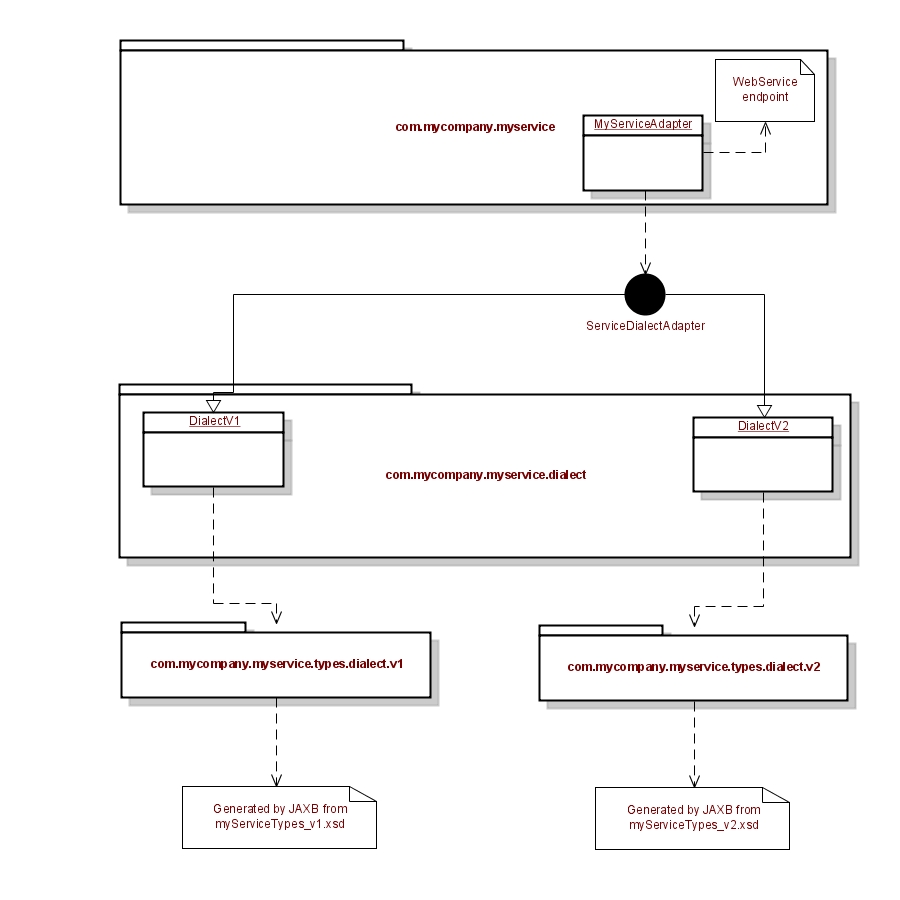 How and when to determine dialect?

A service endpoint may have a set of policies associated with it. Examples of policies are authorization, logging, etc. Typically a policy defines some preprocessing of incoming messages and postprocessing of outgoing messages. It is effectively an interceptor around a service endpoint. Since policy implementations usually use the contents of incoming and outgoing messages, they should be able to understand clients dialects in the same way as service adapters do.

JAX-WS allows policy functionality by means of WS Handlers which execute before and after invocations of service endpoints. For each policy we can define a set of handlers and organize them in handler chain. Since each policy handler will need to know the clients dialect we must determine it before the first handler in the handler chain is called. The most obvious solution is to create a special handler which will always be called first in the handler chain and whose only responsibility will be to determine the correct service dialect adapter for the incoming request and put it in some place where all other handlers and service adapter can access. In JAX-WS the MessageContext is exactly such a place. 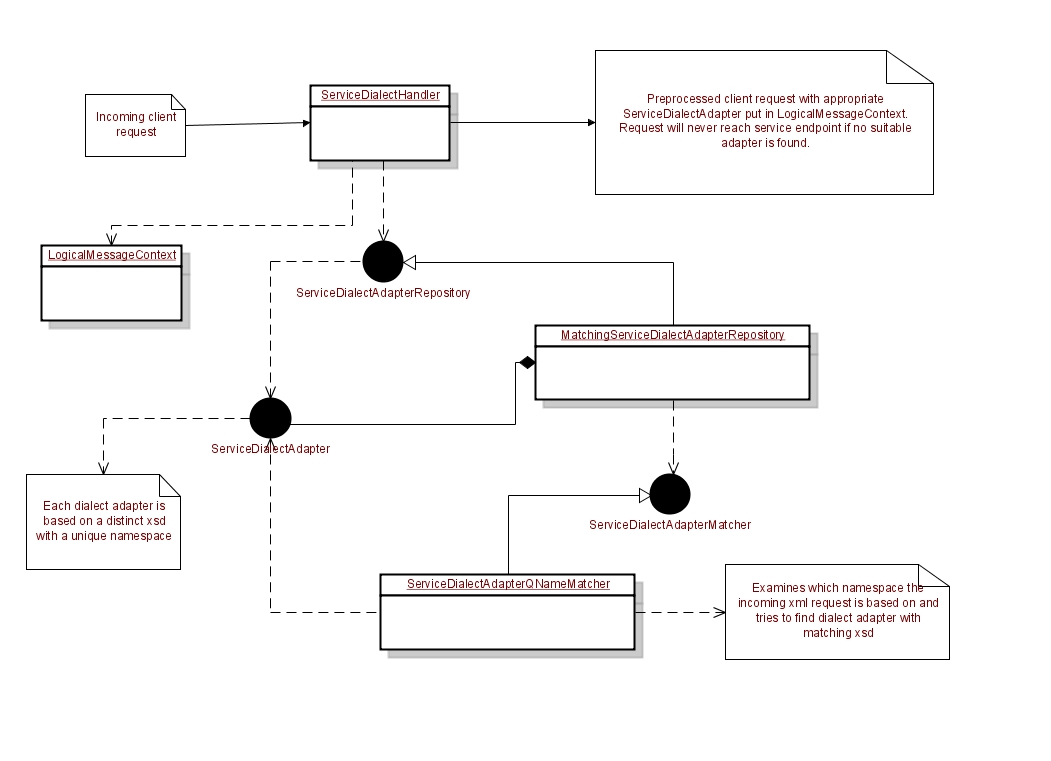 When a web service is deployed in a JBI environment it becomes a Service Unit(SU) which can be configured to interact with any number of other Service Units in the same JBI runtime. A SU interacts with other SUs in two ways:

The most complicated case is when only provider SU supports ESE. In this case the provider SU can emit messages in different formats while the consumer SU can only understand one specific message format. The possible solutions are:

WSDL of the provider SU